The King (the 2012 tribute to Elvis Presley by Jose Feliciano) 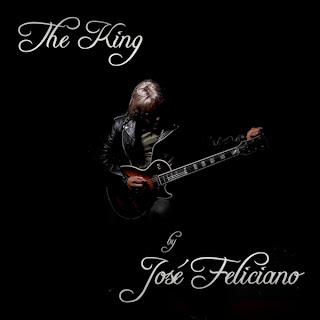 The commercial process still continues though the intense creative journey has now been accomplished. For a year and a half Jose Feliciano awoke almost every morning thinking about his Elvis Presley project, musing over each title that could/should be included. It was truly a labor of love, for Elvis Presley has been an important thread interwoven throughout this elaborate tapestry that is the life of Jose Feliciano.
Never intending to exploit the King’s memory, but rather attempting torelive his own - that of a New York City childhood punctuated by the absolute thrill of Elvis’ music - Jose first heard an Elvis Presley song when he was just 11 years old. Like his classmates, he quickly became an avid follower and waited excitedly for each new record to be released. To this day, he is still able to list them in all in sequence.
For this project, Jose’s choice of material was an exacting process: “With which one can I best honor Elvis without sounding like I’m trying to re-do it, somehow?” “Which one can I turn inside out and put my own fingerprint on it, making it new again?” “How can I get across my own passion without appearing pompous?” It puzzled him, sometimes, but brought with it a studio experience that defies comparison.
Inspiration for Jose, in part, came in the form of a pilgrimage to Memphis in January 2012, with his buddy, Dan Boronico, to join in the annual remembrance of Elvis’ birth at Graceland. It wasn’t his first visit; he had been there twice before but it was remarkable for, along with meeting some of the people who shared Elvis’ physical life while he was on Earth, he was asked to lead Elvis Fans in singing “Happy Birthday” at the Birthday Cake Celebration. Imagine: Singing in honor to the King of Rock and Roll in his own residence to some of his most enduring Fans!
Jose’s life paralleled Elvis’ in that they were both born dirt poor; they both were blessed with a Mother whose faith in God and in her son was extraordinary; they each lived and breathed music from dawn to dusk and each young man fell in love with a teenage girl who offered an enduring love despite the craziness of show business.
Both artists were signed with RCA and had the pleasure of working with Rick Jarrard. Rick was assigned to a young Jose Feliciano and produced his first hits in the English market, including “Light My Fire” and “Feliz Navidad.” A few years later, Rick was asked by the Label to assemble a touring band for Elvis following his “68 Comeback Special.” Rick always had a finger on the pulse of extraordinary talent, so his efforts resulted in the live band that supported the King on stage for many years.
Perhaps unknowingly, Rick was also responsible for tutoring Jose, his “Little Brother” as he’s always called him, by showing him the ropes of studio work, offering him the opportunity to develop as a producer.
At home in his studio with engineer, Al Payson, Jose is at the helm and it’s where he commandeered this memoir in tribute to his King. All of the arrangements, instrumentation, background vocals and sequencing were first swimming around in his mind before laying it all out in the studio with Al. “I loved coming to work each day with the challenge of laying down what I heard in my head. Al played bass on one number, programmed the drums and mixed all the tracks with me. It’s been an experience that might be hard to top.” In light of the dynamics at play with this project, he might be right.
Dan Boronico also understood Jose’s dream and, having accompanied him to Memphis, reached out to two gentlemen forever associated with Elvis Presley. One of them is Johnny Phillips, who heads Select-O-Hits. Johnny Phillips is the nephew of Sam Phillips, the man who first recorded Elvis in 1954. Johnny has taken Jose’s project, packaged it and is distributing it throughout North America.
The other is George Klein. George was a long-time friend of Elvis; in fact, their relationship goes back to their school days. He traveled with Elvis on the road and they were so close that George even chose him to be his Best Man. George broadcasts his radio program from Graceland and is the Executive Producer of this album. “I couldn’t be in better hands. I feel my dream to offer this music in tribute to the King has come full circle with the participation of George and Johnny.”
After a lifetime of taking in all that Elvis’ music had to offer a young and impressionable boy, Jose will (soon!) give his gift: (to) “The King, by Jose Feliciano.”
Posted by Jimusic at 2:33 AM No comments:

Affirmation, How George Benson recorded it, By LiPuma

A review by '70s for Breezin LP
Though Side One of Breezin' had the hits, Side Two was a creamy, seamless masterpiece unto itself. It unfolded with "Affirmation," a song composed by Jose Feliciano, the international superstar singer/guitarist/composer who had recorded it on his album, Just Wanna Rock 'N' Roll (RCA), from the fall of '75. "Affirmation" was the sole instrumental on that Feliciano LP, providing the blind Puerto Rican wunderkind a golden opportunity to showcase his skills on acoustic Spanish guitar, electric rhythm guitar (with a wah-wah effect), electric bass, congas and as a string arranger! LiPuma was enchanted with the melody of Feliciano's relatively brief (3:33) recording. When material was being prepared for Breezin', he presented it to Benson, who liked it immediately. The band worked up an arrangement that loosened and elongated the vibe of the original. Like Feliciano's version, George begins "Affirmation" alone, caressing an introduction of choice notes and a smooth rendering of its signature run down the frets. But when the rhythm section eases in, led by MacDonald's congas, the groove is more relaxed and funky in a way that is quite different from Feliciano's more insistent arrangement, which throbbed with forthright Latin pride. Where Feliciano had his rhythm section drop out for the soaring bridge, Benson's band rides it like the wind, drummer Mason liberating the rhythm by opening up on his cymbals. Benson tickles the strings with a tasty solo that leads into the killer breakdown section, with Upchurch dipping into his effects bag. And then, in what has to be one of the all-time classiest hand-offs in music, Benson makes way for Dalto's wistful electric piano (complete with soulful little comps) before Benson takes it home, getting in a few final signature licks. Benson's "Affirmation" is seven minutes of masterful musical heaven.
Posted by Jimusic at 2:31 AM No comments:

Little Guide to His Music

Many listners know Feliciano like a great performer of songs written by others, effectly Jose is also this and for a period of his career many critics was considerated him like one of the best performer of the Beatles, BeeGees, Dylan and many others included Doors, Stones, Paxton and Bacharach, the only capable to rewrite completely these songs, many times better than the originals in a new mix of soul, guitar and voice in a unique style, the first to add south americans rythms and instruments: You can hear any song of these composers performed by Jose and understand what I say... But He not is only a performer or a latin artist, is more a great musician (can play 30 instruments) and also a great composer. Is hard to decide what songs are most representative of an incredible artist like Jose Feliciano then in more of forty years of career has recorded many differents tyoes of music, from classic to rock, from jazz to latin, from typical pop to R. & B. in five differents languages and together of the most disparate music icones, from the Vienna Simphony Orchestra to John Lennon. Anyway in this section there are Jose compositions with titles of his songs and instrumentals: yes instrumentals, because Jose is now considerated by many critics the most great living guitarist in the world, the only can be play all type of genres on the same high level, from Segovia to Jimi Hendrix ever with his unique style: three guitar exaples? His "Malaguena" (classic), Purple Haze (hard rock), Norvegian Wood (jazz) and Hey Jude (rock) Anyway in my opinion if I must to advice to a new listner three his typical compositions I say: "Rain", "Once There Was A Love" and "Destiny" (but I consider the same incomparables "The Gipsy", "Compartments" and "Angela") and like intrumentals: "Pegao", "La Entrada de Bilbao" and "Affirmation" (advice the original and never released on cd 1975 version). Another hard question today is find these songs, Jose has today a terrible records situation, many many labels have released an incredible number of compilations, many times with the sames songs and titles of others and sometimes without permission, certainly not help the really bad support of BMG/RCA which owner of the originals LP of 60s and 70s and NEVER released on cd entirely like the originals LP and this in a great hungry of these by fans and music lovers; all this can't be than an great help for little labels then have dirty the market and Jose'e career. At the end, a little note: this guide (and almost this Web site) can be considerated in support for the international-english side of Jose, because Jose has also a more "latin side" which includes his early bolero and his lasts album of these years, certainly all these records are good and have a great success for latin listners but are, in my opinion, only a very little side of his arts and genius. I have all his records and I listen all indifferently, but is correct say then sometime not latins listners then find a modern son of his internationals olds records "Feliciano!", "10to23", "Fireworks" and "For My Love" in the recents and awarded cd "Americano", "Señor Bolero" and "Tu Inmenso Amor" can be little bit surpise. If You find a modern son, I advice absolutely to see a his live concert. We know this is the law of the market...and We ever hope then Polygram can give the well support in future also to his english albums, but Jose is ever Jose anyway, anytime anywhere!
Posted by Jimusic at 1:45 AM No comments: